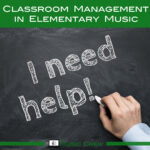 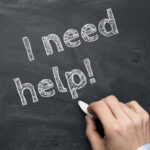 It’s 9:00 in the morning, and twenty seven sixth graders just piled into your room. They are animated and social, and learning a new song may not be high on their personal list of priorities. Forty five minutes later, their teacher comes by to pick them up at the same moment that the kindergarten teacher delivers twenty two five year olds who have had a rough morning. She wishes you luck as she heads to the office for a meeting. Next up is second grade, who is waiting patiently in the hallway for the kindergarten teacher to pick up her class- her meeting ran late and she apologizes as she takes the hand of her line leader to head back to class. Does all of this sound familiar? Teaching music at an elementary school is a LOT. We have a rotating door of classes with new groups of students who have very different needs every 30-60 minutes. Each homeroom teacher runs their classroom differently, and it can be very difficult to switch gears so often and match the classroom climate of their homeroom. Finding a classroom management strategy that works for you is crucial to your success as a music teacher.

When I first started teaching elementary music in 2006, I worked at a school that had used clip charts in every classroom. The chart came with the kids to music, and kids moved their clips down if they didn’t behave. I also used a 3-Strikes system for classwide behavior choices. In both of these systems, students were penalized for poor choices, but there was no room for positive reinforcement beyond verbal praise… which is nice to receive, but doesn’t always hold a lot of value for a child. Each year I would tweak my system. First I allowed classes to cancel their strikes if they turned things around. I tried keeping track of the strikes and awarding the class with the least strikes each quarter with a special day. I thought creating competition between classes would help motivate the students, but it really didn’t. I would often have one grade level where all of the classes did great and only one class won, while in another grade none of the classes really deserved a reward, but I had to give one anyhow.

As my school began the journey of PBIS, we did away with the classroom clip charts. We were encouraged to use positive reinforcement instead of negative consequences with our students. It took me a few years to really iron out the details of a classroom behavior management system, but I am really happy with what I am using now. So… what do I do?

On my whiteboard at the front of the room, I have a small silver board. On this board, I have three laminated music notes. Each time a class enters my room, they start with all three notes. Throughout class, students (as a class) can earn “bonus” notes or lose notes based on their behavior and effort during music. If they earn a bonus note, I take one of the three notes and move it up above the silver area. If they lose a note, a bonus note would move back down to the silver area or one of the three notes they started with would move below the silver area. These notes are fluid throughout the entire class. They can move up and down at any time.

For several years, I kept track of how many notes each class earned, and when they reached thirty notes, they got to vote on a reward such as choose your own seats, bring a stuffed animal to music, or their favorite, “trick your teacher” where we played a trick on their homeroom teacher when they came to pick up their class. The kids generally enjoyed this, but it was a pain to manage and inevitably some kids didn’t want to do what the class voted on. Since my school uses the PBIS Rewards App (where kids earn points for positive behavior choices), I now just give each student in the class a point for each note their class earned. So if the class had five notes at the end of music, each student gets five points added to their account. The students can cash in their points for items from our school store. This eliminates the arguing over which reward they all want AND means that we don’t lose time from music class to vote and carry out the rewards.

I hope this has given you some ideas for how you can manage your classroom! This system has been in place in my room for several years now, and it works well for my students in grades K-6. I am happy to answer any questions you may have! Just let me know in the comments!

Chrissy Hutzel is a music educator in the Cincinnati, Ohio area. She teaches elementary music in a Title I school to about 450 blossoming musicians. Chrissy enjoys playing clarinet, tuba, and tenor sax in the Squeeze Play Accordion Band which performs at area retirement facilities and local Oktoberfest festivals. She loves spending her free time at home with her husband and their two adorable kitties.