Rehearsal Planning: How a Type-B Brain Made an A+ Rehearsal Schedule 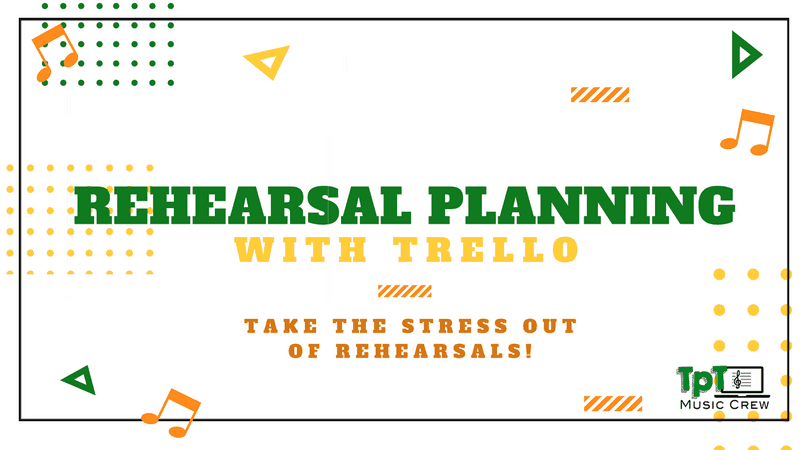 I am one of those people affectionately referred to as a Type-B personality. There is something inherently insulting about being labeled with the second letter of the alphabet, but us type-B’s are so laid back, we don’t really care. Lots of great things start with the letter B: Biscuits…Bands…Bicycles…we’re in good company!

As a Type-B, I often don’t assign enough urgency to tasks.“Wait…did I forget to turn off the kitchen faucet and now water is running onto the floor? Well, if I let it go for a while before cleaning it up, I won’t have to mop later.”

It may look like I don’t care about cleanliness, brushing my hair, or even taking the time to make sure my outfit matches, but here’s the secret – I REALLY, REALLY, DO. I may be scatter-brained, but I like it when things go smoothly.

My relaxed approach to life caused me some problems in my first few years teaching. Concerts and performing groups were routinely under-prepared. I didn’t have a good enough repertoire of teaching tools to compensate for my inclination against organization. And my tendency to wait and see how things would turn out made concerts a mess.

As I gained more teaching experience, I got better and better at planning the logistics of concerts and performances. And believe it or not, I became a pro at putting on shows. But however well my students knew how to get on and off stage and how to behave once there, they were never as musical as I wanted them to be.

I planned rehearsals like I planned anything – by watching TV the night before and then panicking the morning of the event when I realized I had forgotten to think about it. Then Emily came along!

Emily was one of my student teachers. She was brilliant, organized, and horrified with my devil-may-care attitude toward planning ahead. While she was working with me, I had an after-school choir of fourth and fifth graders. They sang well and we had fun together. But every time something would get hard, I would panic and move quickly to the next piece.

About a month before our festival performance, I hit a wall. I had NO IDEA how to get the kids where I wanted them to be, and I was extremely frustrated. Emily sat me down and showed me how she learned to plan as a hot-shot choral music student.

I am not going to lie – the first time Emily drew me a rehearsal chart, I had a legitimate panic attack. There were lines. And boxes. And labels. And it was just too much. Why would anyone do this to themselves? But Emily was patient. She sat with me and helped me make an outline for the next few rehearsals.

That outline saved our group! We moved more quickly and with more purpose than any of my ensembles had before. And with that, I was converted. I was done holding back my students! 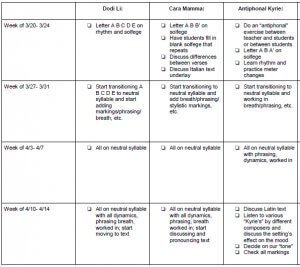 Emily’s contest season rehearsal plans feature exactly what she wants to accomplish with her choirs each week.

That first day, Emily drew me a very simple T-Chart. At the top was the name of the piece I needed to work on. Below that, the left hand side held measure numbers and the right hand side was for the concept to work in those measures. We reflected on our rehearsal, identified where the kids were struggling, and made a note of it. Once I had the problem areas listed out (and there were not as many as I thought), I was able to create simple exercised to fix the problem.

All the little details that seemed overwhelming were now simple. Problems with phrasing? The choir went to the gym and added movement while they sang. Repeatedly missing that interval right before the refrain? A thoughtful warm-up exercise cleaned it right up. Although making the chart was panic-inducing, I was super-relaxed during and after rehearsals. The planning was definitely worth it!

I knew I wanted to have an Orff ensemble the next school year, so I decided to start our rehearsals right with an Emily-style rehearsal plan. After making a T-Chart for each song, I decided to go digital and set it all up in Trello.

Trello is a project management platform that is perfect for organizing rehearsals! I used the free option, but more features are available with paid accounts. If you work with another director, you can add him or her onto your board for simple collaboration.

My percussion ensemble board features a list for each piece we are performing as well as lists of objectives we are currently working on and what we have finished.

Each card in the stack has the skills I want to work on during that rehearsal. After rehearsal, I can leave a note about how the students progressed.

When I am planning a practice, I can just drag the rehearsal cards for each piece over into the appropriate stack. This makes it easy to see my rehearsal at a glance. Al I have to do is click on a card to open it and see the specifics. 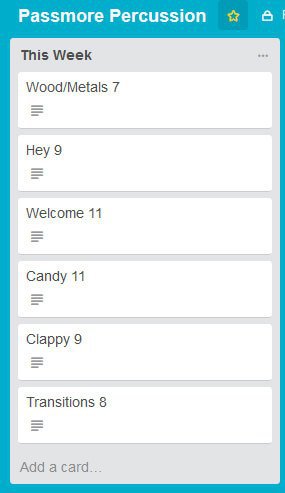 Now that I am into planning, it is really fun! And since I have the Trello app on my phone, I can work on rehearsal plans just about anywhere.  I am already breaking down songs for next year in the app.

Last year’s percussion ensemble was my most accomplished ensemble to date. They managed to play some really tricky music and impressed audiences every time they performed. I am really proud of them! And proud of myself, too. And proud of Emily for being super-smart and showing me how to be a grown-up.

Being Type B isn’t so bad anymore. In fact, I like to think I am a Type B+. Now if I could just remember to turn off that kitchen faucet… 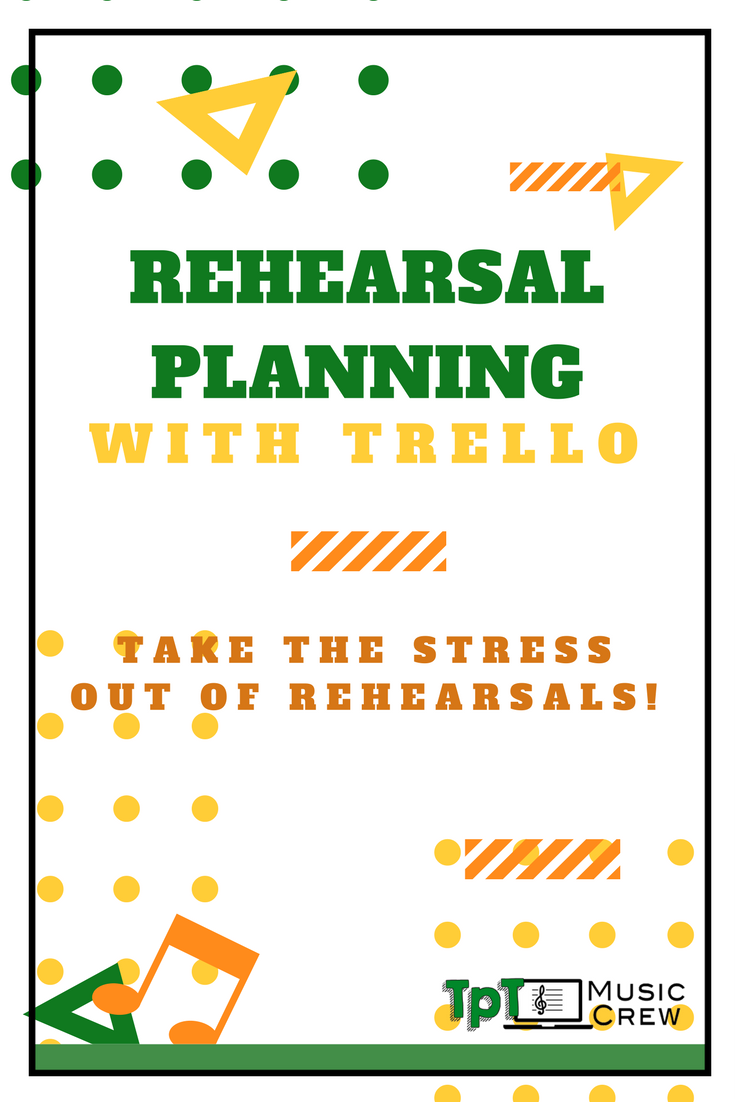 Lauren is a member of the TpT Music Crew, a group of fabulous teacher-authors who work passionately and collaboratively to bring you the best resources and ideas for teaching music.